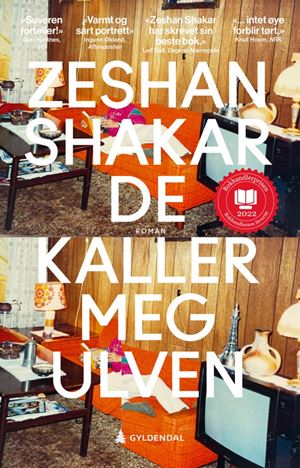 They Call Me The Wolf

Aren’t they supposed to have more, I remember thinking. They were from here after all, Norwegian-Norwegians – shouldn’t they own stuff? All the stuff I saw other people’s parents and grandparents owning. Shouldn’t they have the same stuff? Not even a cabin? At least one without any electricity or water in a place where no one else wants a cabin, like in the middle of the woods in Øvre Romerike. They didn’t even have that. I asked my mother about it. She looked annoyed. All she said was, ‘That’s just how it turned out.’

A man is visiting his father, who is moving to Pakistan. His father doesn’t want to grow old in Norway and his small apartment needs to be emptied.

The chore awakens memories from the man’s own childhood and youth, thoughts about his relationship with his own children, and reflections on his parents’ story – a story that began long before he was born. What are they really leaving behind?

They Call Me The Wolf is a wise and moving examination of culture, history, family, identity and masculinity. It’s a novel about being a man from two countries, about having a mother from Finnmark and a father from Pakistan. It’s about being a parent, about the housing market, and about childhood. And it’s about survival and being hungry like a wolf.

«Zeshan Shakar outdoes himself with “They Call Me the Wolf”. … Shakar captures a high-definition and updated image of Norway as a class-based society, full of revealing details. The upwardly-mobile narrator masters several linguistic registers and need-driven code-switching. Whereas an author like Kjartan Fløgstad prioritizes class over identity in his social analysis, Shakar is interested in the connection between the two: migrant workers were immigrants, and also industrial laborers. And the mother’s family are poor workers from Finnmark [in Northern Norway] with an unknown number of Kven branches in their family tree. Here, minorities are nothing new. “They Call Me the Wolf” is a well-chosen title: The novel thrums with the protagonist’s restless, existentially lonely unease as he roams suburbia for an evening and tries to gain a better understanding of his father. There was always distance, absence. At first because his father had to work so much, then because his marriage fell apart and he moved out. To his son he has passed on small fragments of language, culture and religion from Pakistan, but no more. In this exploration of their relationship, the novel isn’t just interesting, but also deeply moving.»

«Zeshan Shakar tells a simple story about two parents on the bottom rung. Not an eye will stay dry this time either. […] his eye for the representative is typical of the sociology-educated Shakar. He has this in common with this year’s Nobel Prize winner for Literature, Annie Ernaux. Both write protagonists who are social climbers, who abandon their class, also geographically, and establish themselves in the middle class — elsewhere in town. Shakar has a narrative voice that is notably modest — just like Ernaux. […] When his father digs out “Outrageous (!) Hit Collection - Biggest Hits from Top Films” from the glove compartment, our old stories about how the world is put together begin to fall apart. (The very purpose of literature.) There is not the same level of need for our fixed perceptions. The path to tearfulness is shorter. Zeshan Shakar has only written three novels, but he has already achieved a lot. There is something inclusive, even a fondness for people, in his books. Your blood flows more freely through your veins. “They Call Me the Wolf” is a literary bypass surgery that will bring to joy many.»

«…an unassuming, moving story about growing up between two cultures.»

«With his third novel, Zeshan Shakar shows once again how “descriptors” — whether they take the form of language, ignorant prejudices, daily behavior, or politics — shape bodies and lives. […] Shakar again demonstrates he is an author capable of very memorable and intense scenes […] And a writer who writes scene, there is a lot to set expectations for. He has timing, an attentiveness to the minor details, an ability to use different forms of language […] The touch and gaze in “They Call Me the Wolf” assure the reader that this authorship has much more to offer in the future.” »

«Zeshan Shakar is back as an innovative wordsmith. A warm and tender portrait of a father who is on the verge of disappearing […] a reader experience with a light touch and a feeling that declarations of love can come in a multitude of forms, and through examples, a personal study of language.»

«Abounds with tenderness and melancholy. Zeshan Shakar’s new novel is an aching story about giving your all and still ending up on the outside, empty-handed […] The novel provides interesting perspectives on growing up in Norway. Still, it is the description of the relationship between father and son that is most powerful: The father’s mild character and eager conversing in English and limited Norwegian. Everything they don’t say to one another. As for the son, his feelings for his father comprise both frustration and love, both respect for his work ethic and disappointment over what his father has achieved. It is a relationship that is beautifully depicted by Shakar, and it touches at the very root of one’s heart.»

«… packed with complications and tensions. […] They Call Me the Wolf serves up a lot food for thought – for all of us.»

«Shakar’s portrait of a young man torn between two different cultures is written with an intensity and a presence that quivers on every page. While he portrays a specific experience that stems from a Norwegian-Pakistani identity, the emotions and themes are universal. I think all of us can identify with the feeling of wanting to fit in, of having parents from different backgrounds and of different characters that you wish to appease, while also wanting to go our own way. In his novel, Shakar brings these issues to life with delicate strokes of the brush, a great deal of subtext, in simple but beautiful language and with emotional intensity. It’s impossible not to be moved by the book, and by the end I had tears in my eyes.»

«In a subtle, demonstrative tone, Zeshan Shakar depicts a life in the suburbs, on the outskirts, between a father and a son, between two classes, between two (or four!) languages, between cultures and between countries. With linguistic elegance he writes a story in which the characters and situations are as large as life, described with tenderness and sadness, meaning that you can’t leave the book alone. The story of the longed-for, necessary class journey, which never arrives – because it is accompanied by a sense of grief for the distance and of bitterness for the discrimination – makes an indelible impression. They Call Me the Wolf will remain a work of reference in Nordic literature for many years to come.»