Award-winning author of short stories and novels, with a wide and loyal readership.

When his first short story collection Fever was published in 2002, Henriksen immediately captured the public’s imagination with his unique and charismatic voice. This was followed in 2003 by Down, Down, Down, a further selection of short stories. His break-through came in 2004 with his novel Snow Will Fall on Fallen Snow. This soon became a best seller and was awarded The Booksellers' Prize as well as being selected for recommendation by one of Norway's major book clubs, BNB.

Henriksen's trademark is a capacity for combining a strong, at times aggressive, masculine voice with vulnerability. His works are mainly set in a tough, unsentimental, rural environment, which sits uncomfortably on the edges of contemporary urban life; a place where old and new values clash, and where men struggle with contemporary, urban demands on their masculinity.

Henriksen was a journalist for many years on a local newspaper in Kongsvinger, a small town which appears in much of his work, before becoming a full time author. He also plays the bass in his own band, writing song lyrics and composing.

In 2010, the prize-winning director, Bent Hamer, released a feature film, Home for Christmas, based on Nothing but Soft Presents for Christmas to critical acclaim and full houses.

Prizes:
2004 The Booksellers' Prize for Snow Will Fall on Fallen Snow 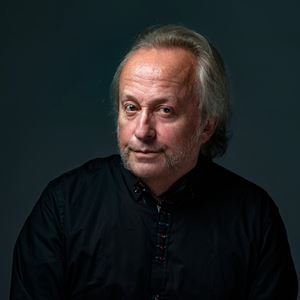